Thanks to Nathan who shared this on his and Michele’s TPRS blog and gave me permission to share.   His idea for an embedded reading came from a student drawing!  He writes: 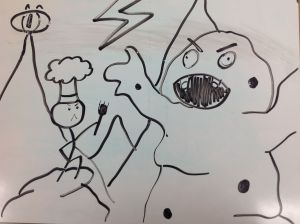 Last week as part of introducing some past-tense modal verbs to my German II students (wanted, had to, was able to), I asked them to draw me pictures to illustrate them, and one student turned out this masterpiece:

We spent about five to ten minutes unpacking this picture in class (that’s the Pillsbury Doughboy fighting a chocolate chip cookie dough monster in Mordor), but for the past week, I’ve been trying to figure out a way to get a little more burn for it.

This morning, however, I realized it would make a great embedded story as long as I withheld enough details from the early drafts. As I result I ended up with something like this:

The emphasis in this draft was to try and make the story as normal as possible.  The picture is so over the top, I wanted to build up to the story slowly.  After reading this draft with the class I then had my students draw me a picture of something from this story, with an emphasis on speed over quality (3-5 minutes drawing time).  We then looked at the pictures on the document camera and discussed how well they matched the story.

The Pillsbury Doughboy also had another problem: the chocolate chip cookie dough was angry at the Doughboy.  It didn’t want to become cookies. The Doughboy had to fight with the cookie dough AND find an oven.

Mr. S. had a big oven and the Pillsbury Doughboy brought the cookie dough to his house. But Mr. S. was a very bad man.  Mr. S. wanted to kill the Doughboy and eat the cookies, but he couldn’t do anything. He could only watch.

In this draft I started throwing out a few of the funky details such as the cookie dough monster, the fight and the evil Mr. S.  Again I had the students quickly sketch me something from this story, but because this story was longer, I asked them to caption their picture.  Some students gave me a couple words, some wrote out full sentences.  Again we debated how well the pictures matched the story, and sometimes went back and forth between the picture and the story several times to establish the links.

Then I showed them the original picture and said this is what we were working towards.  Comparing notes, we then read the final draft.

What I liked about this approach was the “reveal” that I was working towards.  I had a great over the top picture to end with, and the progressive reveal coupled with additional pictures made it a really fun day.  I teach two sections of German II, and even the class that worked with the original picture had only two people figure out that we were working towards this picture before the finish.

All content of this website © Embedded Reading 2012-2014 or original authors.  Unauthorized use or distribution of materials without express and written consent of the owners/authors is strictly prohibited.   Examples and  links may be used as long as clear and direct reference to the site and original authors is clearly established.